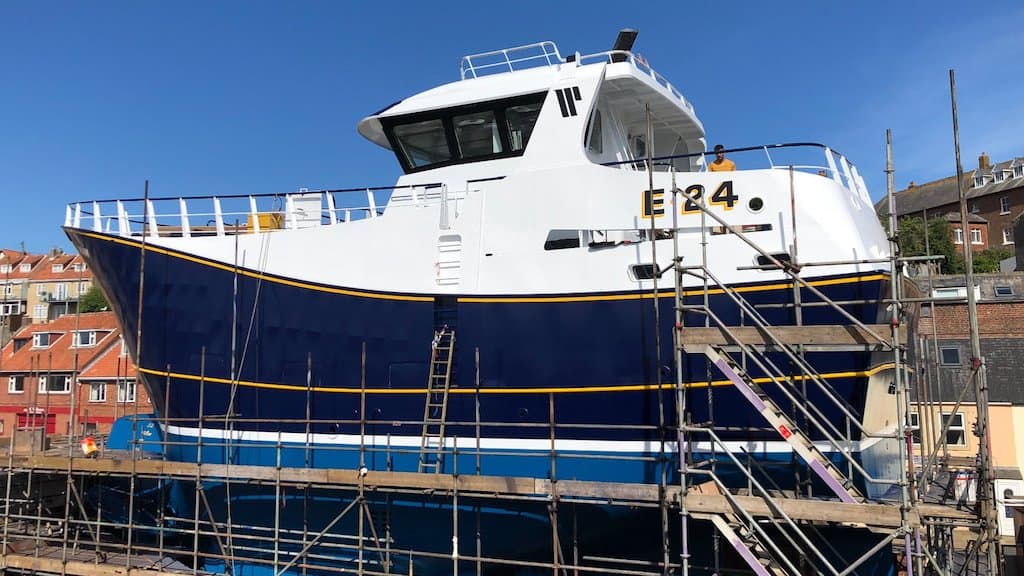 The covers have come off the new crabber under construction at the Parkol yard in Whitby for Waterdance, and Winter of Ladram is immediately attracting attention.

Winter of Ladram is the latest stage in the company’s extensive programme of fleet renewal that has already brought in new capacity, as well as some serious upgrades for older vessels. This includes the recent refit for beamers Elizabeth of Ladram as it joined the Waterdance fleet and Steph of Ladram, the former Sapphire II, with the galley, accommodation, fishroom and hydraulics all overhauled to make it a safer, more comfortable trawler.

Crabber Winter of Ladram is going to be something special when it’s delivered this summer. Just under 20 metres in length, the new vessel is expected to be in the water in mid-July, and to be on its way to the south-west in August.

‘It’s the same round bilge hull as the Amanda of Ladram, with a few tweaks,’ said Rowan Carter, commenting that there’s a lot of new thinking that has gone into Winter of Ladram’s Ian Paton design.

‘On most crabbers you’re afraid of hitting your head, but on this one we have an almost three metre height under the shelterdeck. That means we’ll be able to carry most of the pots most of the time, and it’ll only be occasionally that there’ll be a need to stack anything on top of the shelterdeck,’ he said.

As well as the fishing gear carrying capacity, there is also a large rope pound forward, with space to carry everything needed for half a dozen strings of pots, making the process of shifting gear from one spot to another easier and safer.

‘There’s a lot more space and fresh air under the shelterdeck – and it’s a lot safer to work on board. We’re learning with every boat we build in Whitby, and the relationship with Jim, Sally and Andrew at Parkol is excellent,’ Rowan Carter said

‘This is a unique design and a new take on the south-west crabber, with much more security and comfort for the crew,’ Martyn Youell added.

‘This is a new generation of vessel. It also has ten berths on board so there’s space for researchers and others.’

Product sales will go through GHM in Salcombe.

‘We’re looking forward to seeing the relationship grow with GHM,’ he said.

Winter of Ladram will be skippered by Richard Carroll, currently skipper of Nichola of Ladram, which will be taken by Steve Best.