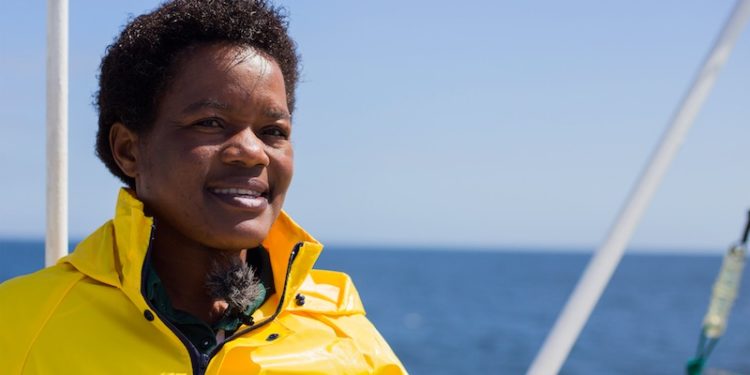 Lüderitz: The City Born from the Sea

Spanish-headquartered fishing group Pescanova has showcased its corporate social responsibility work in Namibia with the screening of the documentary film The City Born from the Sea, detailing the growth of the fishing town of Lüderitz and focusing on the career of Nelago Kwedhi, Namibia’s first female trawler skipper.

Fishing arrived in Lüderitz with Pescanova thirty years ago, changing a small settlement between the sand and the ocean into a busy community, and bringing with it education, jobs and opportunities.

The Academy of Arts and Cinematographic Sciences of Madrid was the premiere of La Ciudad que Nació del Mar (The City Born from the Sea), a documentary that traces the development of Lüderitz, based on true characters and stories. The thread that runs through the film is Nelago Kwedhi, the first female trawler skipper in Namibia, starting in her home village in northern Namibia and continues with a journey through the desert, following the call of the ocean to reach Lüderitz, where Nelago has found a better future.

The City Born from the Sea can be seen here.

According to Nueva Pescanova, this documentary is an example of the Group’s commitment to the communities with which it partners, and whose trust is built and maintained by acting ethically and creating value. Since its arrival in Lüderitz in 1990, Pescanova has driven the development of the fishing industry which has meant the reactivation of people’s flow towards a town almost, until then, abandoned.

At present the Group has two subsidiaries in Namibia, Novanam and Lalandii, which employ more than 2000 people. The Group offers scholarships for employees’ children. It has built houses, nurseries and playgrounds. It has also opened the first fish shop to encourage seafood consumption among the population and is committed to the training of its employees to provide professional growth opportunities, in a land with no future, by favouring the socio-economic development of the community.

Founded in 1960, the multinational Nueva Pescanova Group is engaged in fishing, farming, processing and trade of seafood products, employing more than 11,000 people and selling its products in more than 80 countries.