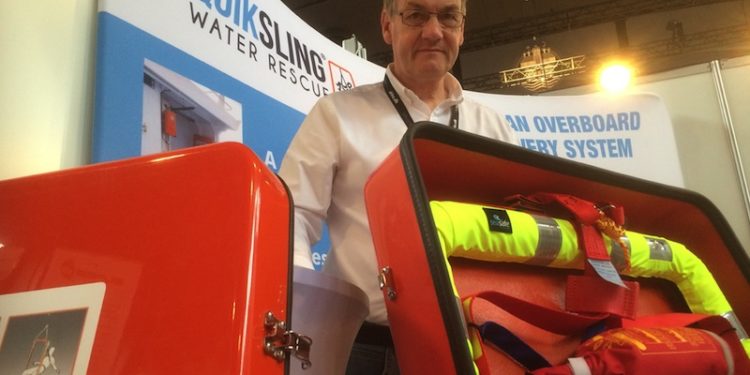 Level lift is a lifesaver

George West’s QUIKSLING goes back to his time on the Peterhead pilot boat and an incident when a number of men needed to be rescued quickly from the sea. As a result of that, he developed it as a device for safe recovery of casualties in the water, and this is now in increasingly widespread use with both fishing and oil industry vessels.

‘They were all picked up but I saw there was a need for something that could be deployed fast to secure men in the water, well away from the side of a rolling vessel,’ he said, adding that he found himself thinking through the night after the rescue until by morning he had the outline in his mind of how the new life-saving equipment should work.

‘It had to be large so it would always be easy get inside and there was also a real need to get away from lifting men vertically from the water,’ he said, explaining that the loss of hydrostatic support on emerging from the water can trigger a cardiac arrest.

‘It was important that QUIKSLING would to lift a casualty substantially levelly, to place less strain on the heart,’ said George.

This is something that has been well documented over the years although it took a long time for the explanation to be found as to why conscious casualties could so often become fatalities in what is often described as “death after rescue.”

He said that with up to nine-tenths of recoveries from water involving conscious casualties, it is clearly a very critical matter and this is something he has put a great deal of thought into.

The result of his thinking is a single item that splits into two after the casualty is encircled, first with the rescuer snapping a chest sling into position and then the casualty submerging the frame to lie under the knees, making a substantially level lift possible very simply.

He commented that initially the new device registered with the highly safety conscious oil & gas industry and some of the first devices were fitted to oil industry support vessels after being produced by a major UK lifejacket manufacturer.

‘They were also the ones who wanted it to be contained in a GRP cabinet so the components would remain protected and be easy for them to access at the point of need; a rescue station that they could grab the kit from and throw immediately to the casualty,’ he said.

The first fishing vessel to install was demersal trawler Aalskere in 2015. This led to the vessel’s agent Don Fishing Company Ltd In Peterhead placing orders for their own vessels. A few weeks later, the first pelagic vessel Charisma left Peterhead with a QUIKSLING aboard.

‘That’s how it all started,’ George West said, commenting that his product has now become part of the safety equipment on many high freeboard fishing vessels.

‘Newbuild vessels especially seem to be fitting this easy-to-use life-saving system. Some of the larger vessels can be seen with one installed forward and another one aft,’ he said. ‘Is this going to be the new industry standard for a life-saving ring?’