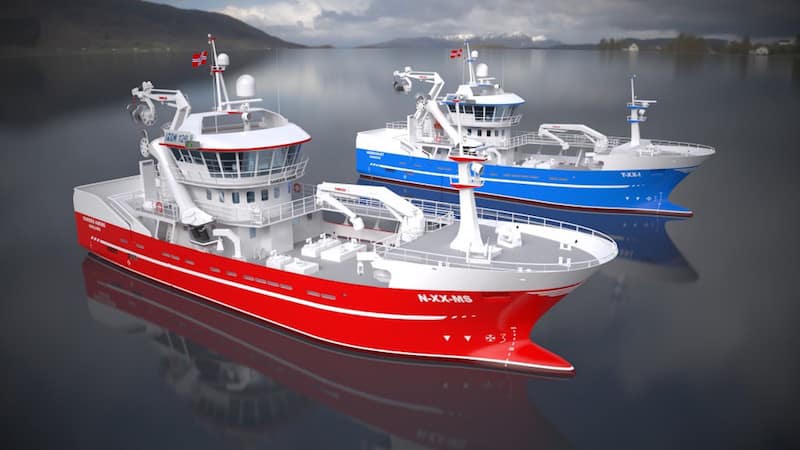 Lofoten fishing company Mirsel AS has ordered a new purse seiner/seine netter to be delivered by Larsnes Mek Verksted in the third quarter of 2017, the yard’s newbuild number 58, and newbuild 59 will be an almost identical vessel to be delivered the following year.

The new Sander Andre is designed by Naval Consult and shipbroker Maritime Competence has been closely involved in the fishing allocation transfer process.

The 38.65 metre, 9.25 metre beam newbuilding is designed to have six RSW tanks with a 420 cubic metre capacity for either live or chilled fish and a CO2 RSW system, plus a vacuum discharging system

Sander Andre is designed for purse seining and seine netting, with combined winches with a 25 tonne pull and capacity for twelve coils of 54mm seine rope. There are two net bins aft for fishing gear.

Accommodation is in four single and three double cabins.

The old Sander Andre, built in 1997, has been sold to Reine company Rowenta AS, and the handover is scheduled to take place at the end of the year, with the fishing allocations transferred to the new vessel.

Larsnes Mek Verksted has also contracted to deliver an almost identical purse seiner/seine netter to Arvesen AS, based at Engenes in northern Norway, with a delivery data in the second quarter of 2018.

Nordhavet is to be built to the same 38.65 metre Naval Consult design, and has the same equipment specification in terms of deck equipment and fish handling gear.

Maritime Competence has also been involved in the project to handle the transfer of fishing allocations to the new Nordhavet.