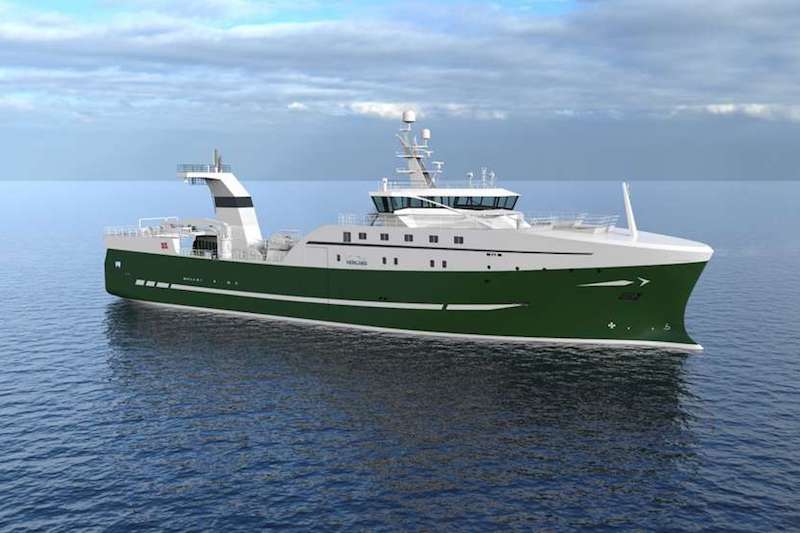 Icelandic company Slippurinn, based in Akureyri, has signed a contract to design, manufacture and install a processing deck for both whitefish and shrimps on board the new trawler being built for Nergård Havfiske, with the hull constructed at Vard Braila in Romania and taken to Vard Brattvaag for completion by early 2020.

The order for the new 80 metre by 17 metre breadth factory vessel was announced in mid-2018, and this is expected to become one of the most sophisticated fishing vessels in the Norwegian fleet.

According to Slippurinnn’s CEO Eiríkur S. Jóhannsson, the order for the Nergård trawler’s factory deck is a significant recognition of what the company is able to do, and this also represents the company’s single largest processing deck contract to date.

‘In recent years we have been expanding on the market for fishing vessels and land-based processing equipment, and we are very pleased that Nergård has chosen us for this project,’ Eiríkur Jóhannsson said, adding that Slippurinn will supervise the delivery of the new trawler’s factory deck as a complete solution, working with sub-contractors including Intech, Marel, Baader and Holmek.

Over the last five years, Slippurinn has built up a reputation for delivering these complex systems, with six processing decks delivered to factory trawlers – most of which are connected to Akureyri-based fishing company Samherji.

These include the processing decks for Berlin NC-105 and Cuxhaven NC-100, built by Kleven for Samherji’s German subsidiary Deutsche Fischfang Union.

Eiríkur Jóhannsson commented that there is a great deal of knowledge of fishing and processing within the Samherji group, and this has been a significant benefit to Slippurinn as these processing systems have attracted attention internationally.

‘The projects we have worked on in recent years have all been highly successful,’ Eiríkur Jóhannsson said.

‘We have been able to develop the equipment we can offer and have placed more emphasis than ever on offering complete systems. This agreement with Nergård and Vard is an excellent testimony to the positive developments that have taken place here and are a real mark of quality for Slippurinn and its outstanding workforce.’