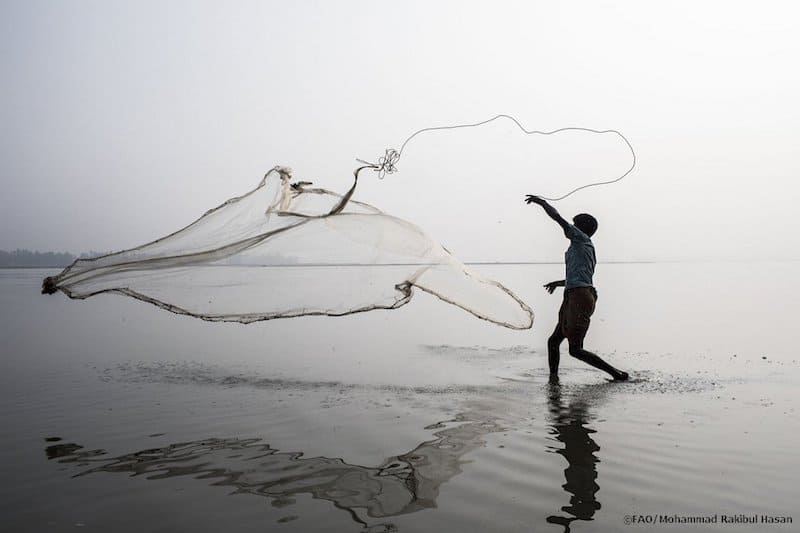 According to the report, wild catches of fish have remained largely steady for some years, while the explosive growth of the aquaculture sector is now starting to show heavily. The FAO states that future growth will require continued progress in strengthening fisheries management regimes, reducing loss and waste, and tackling problems such as illegal fishing, pollution and climate change.

‘The fisheries sector is crucial in meeting FAO’s goal of a world without hunger and malnutrition, and its contribution to economic growth and the fight against poverty is growing,’ said FAO Director-General José Graziano da Silva.

‘The sector is not without its challenges, however, including the need to reduce the percentage of fish stocks fished beyond biological sustainability.’

The report’s figures put the 2016 global catch at 90.90 million tonnes, 2 million tonnes down on the previous year. This is attributed to periodic fluctuations in Peruvian anchoveta associated with El Niño. In general terms, volumes of wild catches levelled off in the 1990s and have remained more or less stable over the last twenty years, while consumption has grown.

Average annual per capita consumption of fish was 10kg in the 1960, and this has roughly doubled, with much of this increase due to the growth in aquaculture through the 1980s and 1990s. Aquaculture production in 2016 hit 80 million tonnes, accounting for 53% of fish consumed as food, according to SOFIA 2018.

The FAO’s report judges that just shy of 60% of wild stocks are fished at biologically safe levels, with 33 fished beyond those safe levels and 7% are underfished. This compares unfavourably to the figures of 40 years ago when 90% of the fish stocks monitored by the FAO were see to be fished at safe levels.

Accordin to the agency, these trends do not necessarily mean that no progress has been made toward achieving Sustainable Development Goal 14, which calls on the international community to effectively regulate fish harvesting end overfishing, illegal fishing, and destructive fishing practices, and to implement science-based management plans aimed at restoring stocks.

The warning from the FAO is that the world has diverged in its approach to sustainable fisheries, with worsening overcapacity and stock status in developing countries offsetting improved fisheries management and stock statuses in developed ones. Counteracting this will require building effective partnerships, particularly in policy coordination, financial and human resource mobilisation and deployment of advanced technologies.

While research suggests that climate change might cause overall global fish catch levels to vary by under 10%, significant shifts in where fish are caught are anticipated, SOFIA 2018 notes. Catches are likely to drop in many fisheries-dependent tropical regions and rise in temperate areas of the north.

According to SOFIA 2018, shifts in the distribution of fisheries will have major operational, managerial, and jurisdictional implications. Research will be needed to develop strategies for allowing both fisheries and the species they exploit to adapt smoothly to climate change.

Also needed is strengthened collaboration to address the problems that abandoned fishing gear debris and pollution by microplastics are causing in aquatic ecosystems. Priority should be given to preventive measures that reduce marine litter and microplastics, efforts to upgrade recycling schemes to ‘circular economies’ as well as phasing out single-use plastic, says FAO’s report.