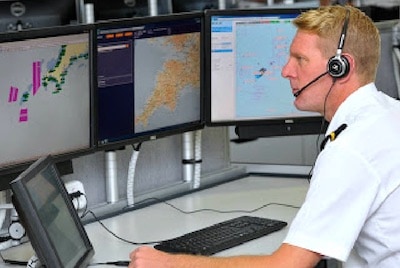 Two fishermen wearing lifejackets have been dramatically rescued from their liferaft by a passing fishing vessel after their own vessel capsized 3.6nm off Prawle Point early on Friday morning.

The vessel had been on route from Plymouth to Brixham when the crew realised that something was wrong as the boat began to list and they had just enough time to put on their lifejackets and get into a liferaft before it sank. It was at this moment that the EPIRB alert was triggered.

HM Coastguard received a VHF radio broadcast just after 9AM from a fishing vessel reporting that they’d just rescued two people from a liferaft and within ten minutes they also received the EPIRB distress after it had been processed by the satellites. Salcombe RNLI Lifeboat and the Hope Cove Coastguard Rescue Team were alerted and went to the scene.

The rescuing fishing vessel reported that despite the frightening ordeal, both crew had been wearing lifejackets when the boat capsized. The capsized vessel sank a few minutes later.

‘This incident happened so quickly that the casualties on the capsized vessel weren’t even able to make a Mayday call or trigger a DSC alert,’ said HM Coastguard duty controller James Instance.

‘Thankfully they were seen by a nearby vessel that went to them straight away. However the crew were also well-prepared in the fact that they had an EPIRB on board and shortly after the call we received an emergency signal from that beacon giving us their exact location. If we hadn’t have received the call from the rescuers we would have sent a helicopter and lifeboats directly to the position of that alert.‘

‘EPIRBs are designed to activate when they hit the water automatically sending the coastguard your position which is displayed on our charting system – in this case when the boat capsized. It just goes to show how quickly things can go terribly wrong before you get a chance to notify the Coastguard. We’re delighted that in this situation the crew were able to take action by wearing their lifejackets and deploying their liferaft to prepare for the worst.’