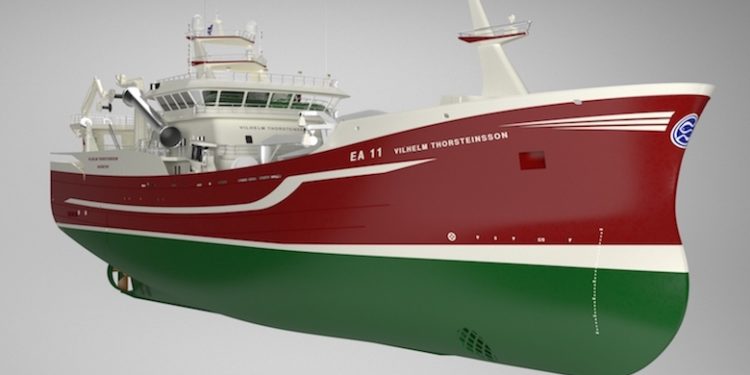 Karstensens Skibsværft is set to design and build two new pelagic trawler/purse seiners ordered by Icelandic fishing companies, and the yard has selected Rolls-Royce Commercial Marine to deliver an extensive package of ship equipment to both ships.

The two 88 metre fishing vessels will be outfitted with engines, propulsion, steering gear, rudders and winches together with connected control systems from Rolls-Royce. The equipment will be delivered from four of the company’s eight production facilities in the Nordic countries, three in Norway and one in Sweden.

One of the ships is to be named Vilhelm Thorsteinsson and has been ordered by Samherji, while the other vessel is to be named Börkur and will be built for Sildarvinnslan. Both newbuilds replace existing vessels of the same name.

‘We are proud to be selected once again as a key supplier to the advanced Icelandic fishing industry,’ said Asbjørn Skaro, Rolls-Royce Commercial Marine’s director Systems & Deck Machinery.

‘The Karstensen yard is an experienced builder of this kind of tonnage, and the two trawlers will be equipped with advanced and energy efficient systems developed for operations in a harsh environment.’

Vilhelm Thorsteinsson is scheduled for delivery from the yard in June 2020, while delivery of Börkur is planned for December 2020.

The list of Rolls-Royce equipment specified for the two identical vessels consists of twin six-cylinder Bergen B33:45 diesel engines, a Promas propulsion and manoeuvring system, and gear, one steering gear installation, three tunnel thrusters, a Helicon X3 control system and a package of low-pressure hydraulic winches and control systems. In total 17 winches are to be delivered to each vessel, designed for trawl and purse seine fishing.