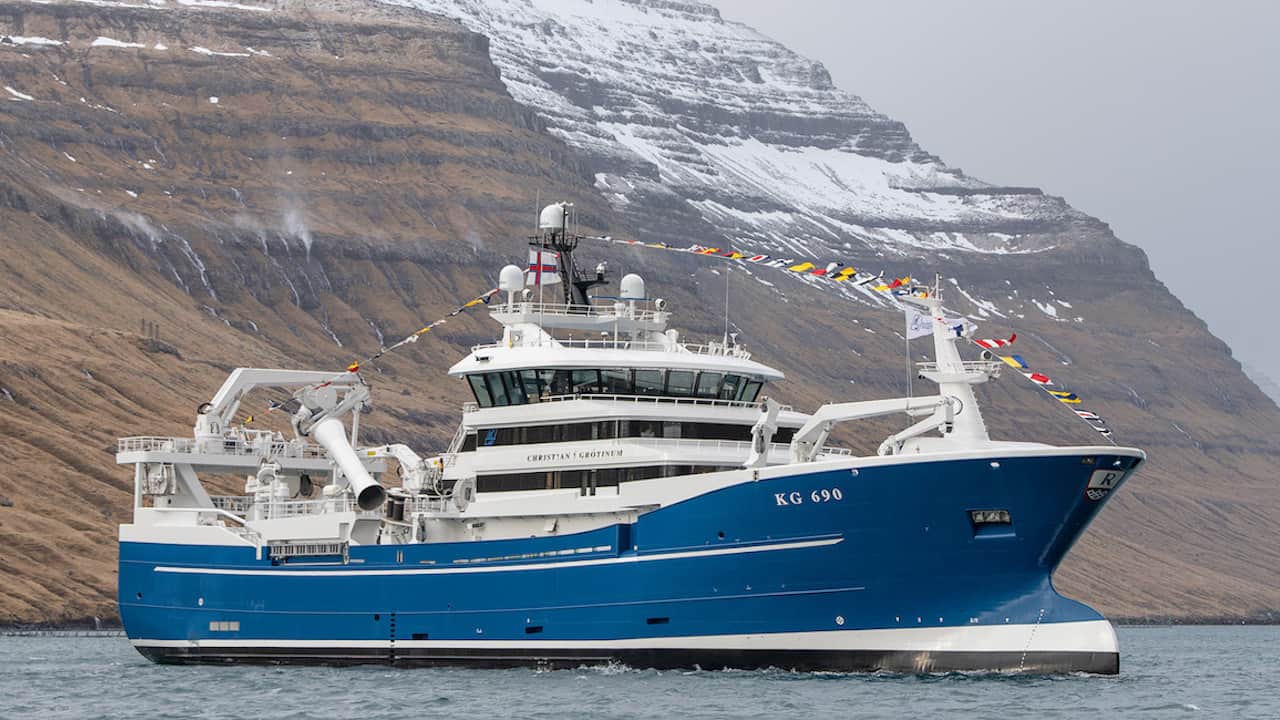 There has been a Christian í Grótinum in operation since 1975, and the latest pelagic vessel to carry this famous name has been delivered to the Rasmussen family in Klaksvík, where the new vessel docked after its delivery trip from Skagen.

This latest Christian í Grótinum is an 89.35 metre by 17 metre breadth tank vessel with a 3590 cubic metre capacity in its sixteen tanks, and represents a switch away from freezing at sea and back to landing fresh pelagic catches for processing ashore. It replaces the previous vessel of the same, the former Norwegian pelagic freezer Kvannøy, which is now operating in Greenland, plus there was a stopgap vessel brought in to catch the company’s quotas as the former Margrét was acquired from Samherji, and has since been sold to another Faroese operator.

The new Christian í Grótinum is among the latest generation of pelagic vessels built for higher carrying capacity, providing a higher level of flexibility and more options for pursuing fisheries further from home, while also being designed to incorporate the highest standards of technology to achieve maximum catch quality coupled to minimising fuel consumption, which keeps operating costs and emissions at the lowest possible level.

Like the majority of newbuilds that come from Karstensens Skibsværft in Skagen, Christian í Grótinum is the yard’s own design, developed in collaboration with the owners. The high efficiency of this new vessel comes at a price, and it’s clear that no expense has been spared here as they have gone for the best at every level. Ordered in 2020, Christian í Grótinum has been built at the Karstensen yard in Gdynia before being brought to Skagen in July last year for the later stages of outfitting.

Christian í Grótinum is laid out with the superstructure amidship, leaving a spacious gear handling deck aft, with options to pump fish on board fro either quarter of over the starboard side when purse seining. The main target species are herring, mackerel, capelin and blue whiting, and the pattern of operation is expected to be similar to that of the previous vessel.

Accommodation and crew areas are placed in the superstructure, located as far as practical from the propeller to ensure a low-noise environment for the crew. During trails noise measurements showed levels well below any requirements and recommendations. There are five single and two twin cabins on boat deck one, the mess, galley and rest areas on boat deck two and on boat deck three are six more single cabins and the ship’s gym.

The deck is laid out with a pair of net drums slightly offset to port and in line with the two shooting and hauling gates at the stern, and the net bin on the starboard side. Christian í Grótinum’s owners opted for a fully electric winch system from Ibercisa with a Scantrol control system. The purse seine setup is from Macgregor Triplex, and the three 20-inch electric fish pumps and associated hoses and cables are from Macgregor Rapp.

Christian í Grótinum is fishing with a pair of MLD TSS 14-19 square metre controllable trawl doors, the first pair of such doors from the company to be supplied to a newbuild. Trawl gear includes an FS Atlantica-2600 PEN diamond/hex trawl with an eight-panel belly for blue whiting, 2600 and 2300 metre Gannet trawls from Vónin for blue whiting and an 1856 metre Seagull trawl for herring and mackerel. Vónin also supplied the balloon and light codends for blue whiting, the trawl warps and a package of rigging and spare parts.

The propulsion is a complete Wärtsilä installation with a 7320kW output, with a 3300kW shaft alternator fitted to the gearbox PTO, as well as pair of Caterpillar auxiliaries. All electrical power systems are controlled by a DEIF Power-Management-System. Further on bus-bar breaker is fitted in main switchboard, allowing the aft thrusters to be fed off shaft alternator and forward thruster and domestic load off the diesel generator set. The electrical power system is fitted for sliding frequency (60-50 Hz), by means of frequency converters for 400/440 V and UPS clean power static supply/converter for 230 V. This allows the main engine and propeller revolutions to be reduced by 17%.

The design is for the main engine to serve as the primary energy source for both propulsion and deck systems, so during hauling and shooting the shaft generator is clutched in, working on the principle that when full power is required for the deck, there is a low propulsion power requirement.