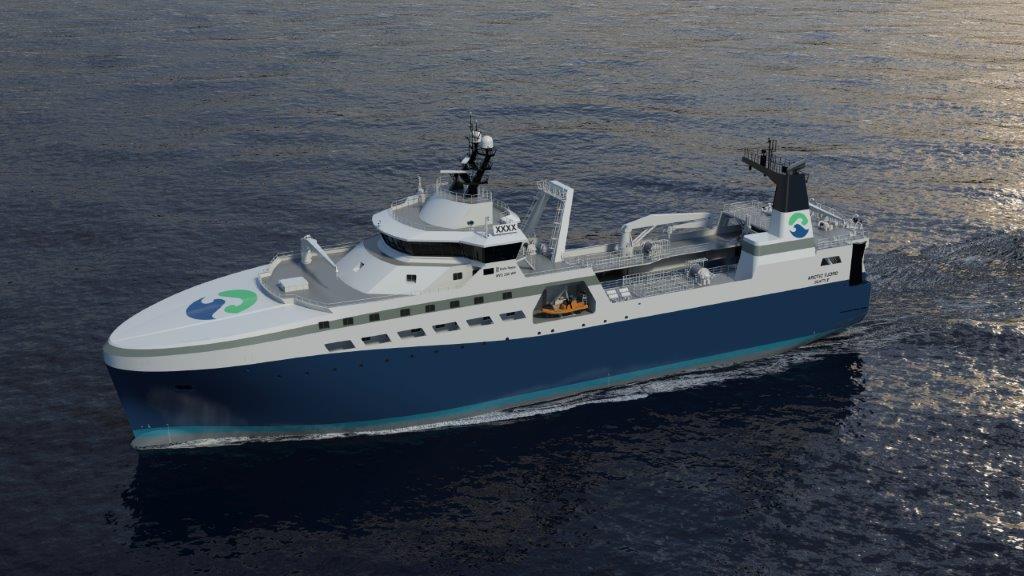 Seattle company Arctic Storm Management Group last year signed a contract for the largest fishing vessel to be built in the US, with the 100 metre factory ship designed by Rolls-Royce. Now Arctic Storm have placed an order with Carsoe US Inc to outfit the new trawler’s fish processing deck.
The deal with Arctic Storm Management Group represents Carsoe’s first large-scale contract in the US. Carsoe will deliver an advanced processing system for handling Alaska pollock on board this new trawler which is also the largest and most advanced vessel to be built for the US since the 1980s.
The Rolls-Royce NVC336WP design has a 100 metre overall length with a 21 metre beam. Currently under construction at Thoma-Sea Marine in Louisiana with a 2021 delivery date scheduled, it is the first Rolls-Royce-designed fishing vessel to be built in the US, and also the largest Rolls-Royce fishing vessel to be built anywhere in the world. The design places emphasis on low fuel consumption, limited emissions and vibrations as well as a low noise levels.
‘All other ships have typically been re-builds of ships from the 80’s and 90’s, and nobody has ever before commissioned a ship specifically designed to catch Alaska Pollock in the ocean around Alaska. Strong demand and future outlook for all Alaska pollock products in the US, Europe and Asia has encouraged us to reinvest in the industry. The new ship replaces our smaller existing vessel Arctic Fjord,’ said Arctic Storm Management Group CEO Doug Christensen.
Carsoe’s operations in the US and Aalborg will now work in close collaboration with the shipyard to deliver the catch handling deck for the new trawler. The processing setup is for the production of Alaska pollock as fish blocks of surimi, as well as production of roe, fishmeal and fish oil.
The ship for Arctic Storm Management Group will be equipped with Carsoe’s state-of-the-art fish factory for the production of Alaska Pollock, either as fish blocks or surimi as well as roe, fish meal and fish oil.
’Adding to projects currently being delivered, Carsoe’s position, as a leading supplier for on-board solutions, again proves that we can handle complete fish processing factories for ships of this size,’ said Carsoe CEO Mikkel Jacobsen.
‘Arctic Storm Management Group strengthens our market position significantly, not least in the US. We’ve been chosen as supplier because of our team of skilled and very experienced employees – and because of our industry-leading solutions and workmanship.’