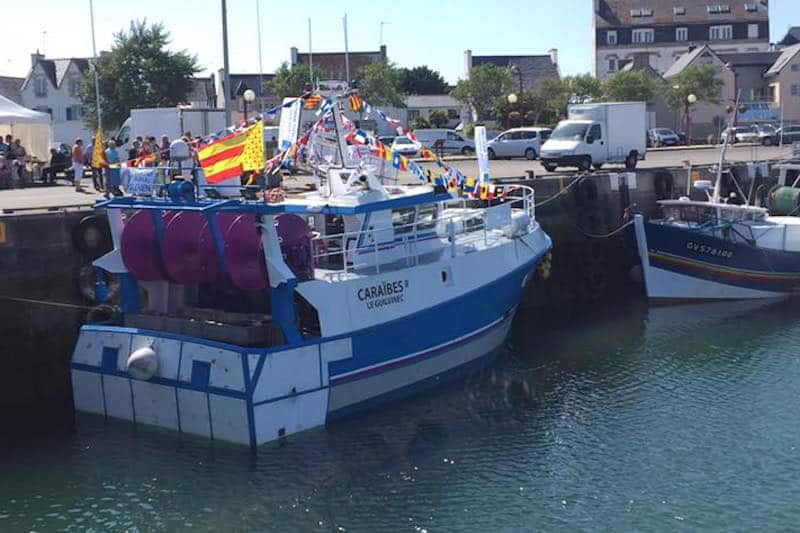 The latest addition to the French trawl fleet was on show yesterday in Lesconil. The new trawler has been built for Julien le Brun, who operates four fishing vessels in Plobannalec-Lesconil.

Following trials, the new Caraïbes II was handed over by Chantiers Gléhen in Douarnenez, which is currently building two more trawlers to the same design by naval architect Coprexma as well as the new 25-metre Bara XVI for Armament Bigouden in Le Guilvinec.

According to Gilles Rolland at Coprexma, Julien le Brun’s requirements were for a modern, efficient, 15 metre trawler with plenty of accommodation space, separate from working areas and sound insulated. He wanted an efficient vessel with a large propeller and capacity for holding live catches.

Caraïbes II is designed primarily for fishing langoustine and the trawler has twin tanks on board, each capable of holding 350kg, as well as a 20 cubic metre fishroom. The main engine is a Caterpillar C18 driving an 1830mm diameter propeller via a Masson gearbox. Bopp supplied the twin trawl winches capable of holding 800 metres of 18mm warp and the three net drums mounted over the stern.

Coprexma has more than thirty years of experience in this sector and has been a leading fishing vessel designer, mainly for the French fleet. The company’s founders Jean-François Ansquer and Gilles Rolland and their team have a track record of more than five hundred vessels of all kinds behind them, and several innovative designs currently under construction.

In addition to Caraïbes II’s sister vessels and the Bara XVI, the Coprexma-designed Zachary was completed recently at Chantier Naval Croisicais, a new wooden 12 metre trawler is taking shape at the Hemeury shipyard and Coprexma has provided the design work for the refit of the purse seiner Etoile Polaire, currently being fitted out at Chantiers Piriou. The company also designed the innovative 17 metre aluminium catamaran being built at ECOREP-Piriou in Algeria for aquaculture operations at Port Bouharoun.