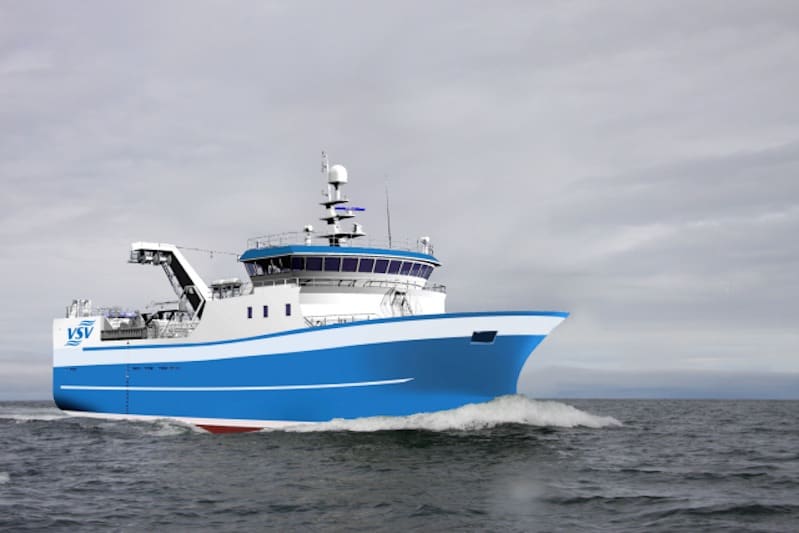 The new trawler being built for Icelandic fishing company Vinnslustöðin (VSV) is heading for its first sea trials with fishing gear shipped from Europe for that purpose.

The two sister vessels, VSV’s Breki and Gunnvör’s Páll Pálsson, are designed by Skipasýn and are under construction at the Huanghai yard at Rongcheng in China. The expectation is that Breki will undergo sea trials first, using a set of trawl gear sent by the company’s own net loft, Bridon warps from the UK, plus a pair of trawl doors and a clump weight from Thyborøn Trawldoor in Denmark.

The intention is to test the gear under real conditions, but the problem is that the waters near the yard are shallow and to get to an area with a depth of 100 to 150 metres is a two-day trip each way and the authorities are unlikely to allow this.

‘The main factor is to test the towing power of a trawler with the largest propeller in the Icelandic fleet,’ said engineer Rúnar Helgi Bogason, who has spent more than a year at the yard overseeing the construction along with superintendent Finnur Kristinsson.

‘There is time and trouble involved in sending the fishing gear all this way, but we need to be certain that everything works as it should do before the trawlers are handed over.’

Breki’s engine room is complete and the main engine is due to be tested for the first time next week. That will be followed by a series of tests culminating in fishing trials.

Breki and Páll Pálsson have been designed by Skipasýn with exceptionally large propellers. According to Skipasýn’s marketing manager Rakel Sævarsdóttir, the slender blades are more efficient than shorter, broad propeller blades, the result being that by enlarging the propeller and reducing the revolutions, up to 40% more power can be achieved, reducing running costs.

The two trawlers are built to the same design and are both fresher trawlers. The only difference between them is that as Breki is expected to fish more on redfish than Páll Pálsson, it has a larger reception pound and an additional deck hatch.

The pair are due to be handed over in March, ready for what is expected to be a 58-day delivery trip.