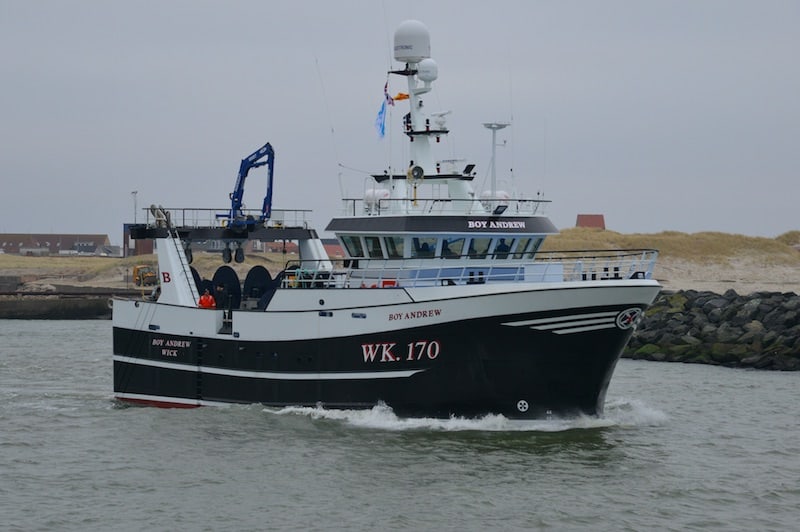 Vestværft-designed and built fly-shooter Boy Andrew has been delivered to Wick company Bremner Fishing Co. The newbuild is based on a hull built in Poland and fitted out by Vestværft at Hvide Sande in western Denmark.

This is a family operation, run by Andrew Bremner and his son, who shares the same name, and this is their fifth newbuilding. The new boat was christened by the skipper’s wife as a bottle was cracked on the box at the quayside in Hvide Sande, before Boy Andrew departed to steam north to Thyborøn to collect its fishing gear from Thyborøn Trawlbinderi.

Boy Andrew sailed on Wednesday last week from Hvide Sande after a flurry of activity as the last of the suppliers and contractors finished their work on board. The next day in Thyborøn Boy Andrew collected its high-lift Tyslervod 1060 mesh and Combivod 1220 mesh seine nets, and 4000 metres of 44mm and 46mm seine rope were spooled onto each reel.

Boy Andrew is laid out with the catch taken on board aft and the fish taken forward on a conveyor to the amidships catch handling area where there is a fully integrated VCU fish handling system. The gutted, washed and graded fish are then transferred to the 1100-box capacity fishroom. The fishroom chillers and the two Buus ice machines are supplied by Lemvig Maskin og Køl.

Much has been made of the safety and comfort aspects of Boy Andrew’s design, with well fitted-out single and twin cabins at main deck level and a roomy galley and mess area.

Boy Andrew’s usual fishing patterns are to operate north of the Shetland Islands for ten-day trips, with catches of mainly cod and haddock landed at Lerwick or Scalloway before heading home to Wick. According to Andrew Bremner, this keeps the boat busy for half the year before their quotas are exhausted.

The previous Boy Andrew was sold last autumn to another Scottish company to be converted to fish for crab.

Newbuildings from MEST for Bakkafrost