The first of a series of trawlers being built for Norebo at the Severnaya (Northern) shipyard in St Petersburg is being fitted with a package of 43 winches and an ATW control system supplied by Naust Marine.

In total, Naust Marine is delivering a total of 258 winches of various sizes to the series of six 81.60 metre LOA by 16 metre breadth trawlers, and the winch system for the first, Kapitan Sokolov, has been delivered to the yard for installation.

Each of the six trawlers in the series is being supplied with an all electric system that includes a pair of main trawl winches, plus 41 auxiliary winches, including a net drum that can double as a third winch with the necessary linkages to the control systems. Each winch is driven by a 355kW AC motor, and the trawl winches are able to act as anchor winches.

Naust Marine is also supplying three complete marine telescopic jib cranes for load handling per vessel. The cranes are equipped with a separate operator panel which provides a comfortable work environment for the operator. The cranes can also be operated from a portable radio remote control panel. All controls include full proportional speed control for all crane motions. These cranes will allow for an effortless and safe operation when loading and unloading catch and cargo.

‘We spent a great deal of time and effort on designing the optimal winch and control systems solution for the new vessels,’ a spokesman for Naust Marine said.

‘For instance, the vessel will be able to operate three trawl gears. This type of innovative design assists the trawlers in catching and processing everything at sea with an increased capacity. Post design, Naust Marine production went into full swing in Iceland for the controls and cabinets, and with Naust Marine Spain manufacturing the winches and motors.’

Naust Marine is currently in production for the next two vessels, Kapitan Geller and Kapitan Ostashkov. 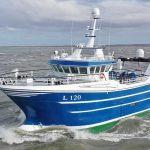