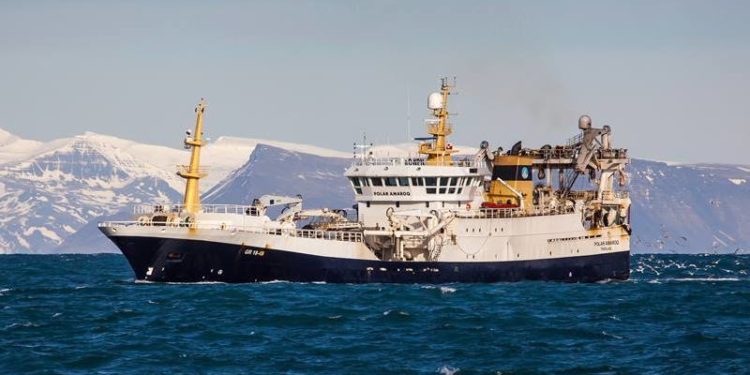 Greenlandic pelagic vessel Polar Amaroq has a variety of trawls for the various fisheries it pursues through the year, but skipper Geir Zoega is particularly satisfied with the Vónin trawls on board – neither of which came to Polar Amaroq as new gear.

‘We use the 2304 trawl for blue whiting and this was originally made for Börkur. They used it for one season in 2014 and we have now used it for three seasons,’ he said, adding that most of Polar Amaroq’s blue whiting is caught in Faroese waters in the spring as the fish are dispersed and moving northwards, with tows of mainly ten to fourteen hours, but occasionally shorter tows when fishing is heavy.

‘One thing I really like about this trawl is how well it’s made. We haven’t had any problems with this trawl. This last season we had to fix one of the selvedges, but that’s the only repair we’ve needed to do. Apart from that, the trawl goes back to Vónin for an overhaul between season to have the odd mesh replaced, and we also had the belly replaced a couple of years ago.’

He said that this last winter Polar Amaroq did well on capelin to begin with, trawling first and then purse seining for most of the unexpectedly good capelin season, and was also part of the research work done at the beginning of the year.

Once the capelin season had ended, Polar Amaroq switched to the Vónin 2304 trawl – and caught 11,000 tonnes in the five weeks they were on blue whiting.

‘We were landing our blue whiting in Skagen, so we spent as much time steaming as we did fishing,’ he said, estimating that this trawl has caught between 70,000 and 80,000 tonnes in its working lifetime so far on board Börkur and then Polar Amaroq.

‘It’s a smaller trawl, but with a longer belly and I’m very satisfied with it. I don’t know why it works as well as it does – Faroese netmakers know exactly how to make trawls for Faroese waters. It works outstandingly well, and you can’t put your finger on exactly why. I haven’t changed anything, just kept it rigged as Jógvan said except that we changed to a herring belly.’

He said that both Polar Princess and Polar Amaroq have done exceptionally well with this trawl, which Geir Zoega uses for herring and as a spare trawl for the mackerel fishery.

‘The Capto rope that both of these trawls are made from is a development,’ he said, commenting that he also liked working with the old Super-12 rope that Vónin trawls used to be made from before Capto replaced it.

‘Capto is great and I’m happy with it. It’s good to haul and shoot, the trawl just goes straight off the drum and right back on again,’ he said