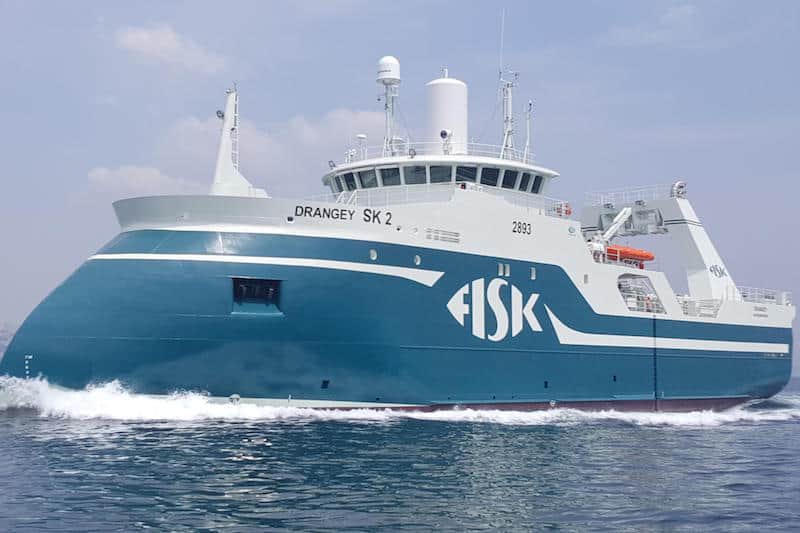 The third of a series of new trawlers for owners in Iceland has been handed over by the Cemre Shipyard in Turkey.

Designed by Icelandic naval architect Skipatækni, the four fishing vessels are a new generation of fresher trawlers for Samherji and Fisk Seafood.

The first two trawlers in the series, Kaldbakur and Björgúlfur, have already been already delivered to Samherji, who are also due to take delivery of Björg, the last of the series of four later this year. This third delivery is Drangey SK-2 for Sauðárkrókur company FISK Seafood, and will replace the older Klakkur SK-5.

The 51.80m Klakkur was built in Gdynia in 1977 for Westmann Islands company Klakkur and operated from the islands for many years before being sold to Hraðfrystihús Grundarfjarðar. The trawler came into FISK’s ownership when the two companies merged in 1996.

The new Drangey is now steaming to Iceland and its catch handling deck will be fitted once it arrives.

It features an innovative inverted bow for optimal seakeeping and performance, and measures 62.54 metres LOA with a 13.50 metre beam.

The four trawlers in the series have Seaonics electric winch systems, with two 35 tonne main trawl winches, two pairs of four tonne sweepline winches at the head of the full-length trawl deck, and a single 25 tonne pull net drum mounted over the deck. Additional winches are also from Seaonics and include 20 tonne gilsons, 16 codend winches and a package of smaller winches.

The main engine is a Yanmar 6EY26W developing 1620kW at 750rpm to drive a 3800mm Cat Propulsion propeller inside a nozzle via a Reintjes reduction gear.