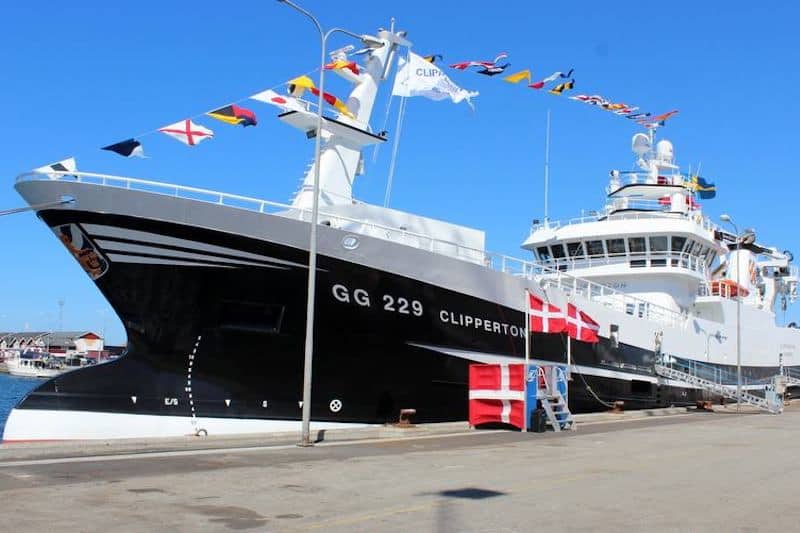 Swedish pelagic trawler Clipperton was delivered by the Karstensens yard at Skagen in Denmark earlier this month. The new vessel has been built for B-C Pelagic, which brings together two long-established pelagic operators, the Jansson and the Backman/Malmborg families.

The Jansson family (Kenny, Runar and Aste) are known for operating the Bristol and the Backman/Malmborg-family (Marcus, Reine and Erling) operated the original Clipperton. Those older vessels have now been sold ahead of the delivery of the new Clipperton that is set to fish the combined quotas of the companies that merged to form the Donsö-based B-C Pelagic.

Far from being a standard design, the new Clipperton’s design, specification and arrangements are the result of an extensive and close co-operation between owners and yard. Main focus has been on optimising working, safety and comfort for the crew, providing ideal catch handling- and storage facilities, and achieving optimal fuel consumption.

Clipperton has an overall length of 63 metres, a moulded breadth of 12.80 metres and has an RSW tank capacity of 1460 cubic metres in nine tanks. Accommodation is for twelve persons.

There are a number of notable firsts with this vessel, including its place as the largest pelagic vessel under the Swedish flag. The Karstensen yard has a relationship with Swedish fishermen that goes back many years, and its construction for Swedish operators continues with the new Tor-Ön and Torland pair that are scheduled for delivery in late 2109, as well as the German-flagged Kristin being built for Swedish owners and due for delivery in July 2019.

Clipperton has a full set of electric winches from Rapp Marine, plus it is the first Swedish fishing vessel to have four 55-inch monitors replacing the usual 16 24 and 26-inch screens. The monitor configuration is fully configurable through Furuno’s Video Wall concept. It has the largest electronics package delivered to a Swedish fishing vessel and at close to 1000hp, the Swedish fleet’s most powerful thrusters.

The hull was built at the Nauta Shipyard in Gdansk and arrived in December in Skagen for fitting out.

The main engine is an MaK 6M32C developing 2999 kW, driving a 3800mm Caterpillar Propulsion MPP 950 propeller via a Scana Volda ACG-750K reduction gearbox to turn the propeller at 130 rpm.

A power take-off on the reduction gearbox drives a Cummins shaft alternator to produce 1650kWe, while additional power is provided by three Scania DI16 auxiliaries, each developing 600kWe.

During hauling and shooting, when the electrical winch system is in use, the gearbox PTO is clutched in, and power is supplied by the shaft alternator. When there is demand for full power on the winches, there will normally not be same demand for power on the main engine. This means that the main engine is the power source for both propulsion and winch system. During normal towing, the shaft alternator can be disengaged from switchboard, and electrical power supplied by either of the gensets.