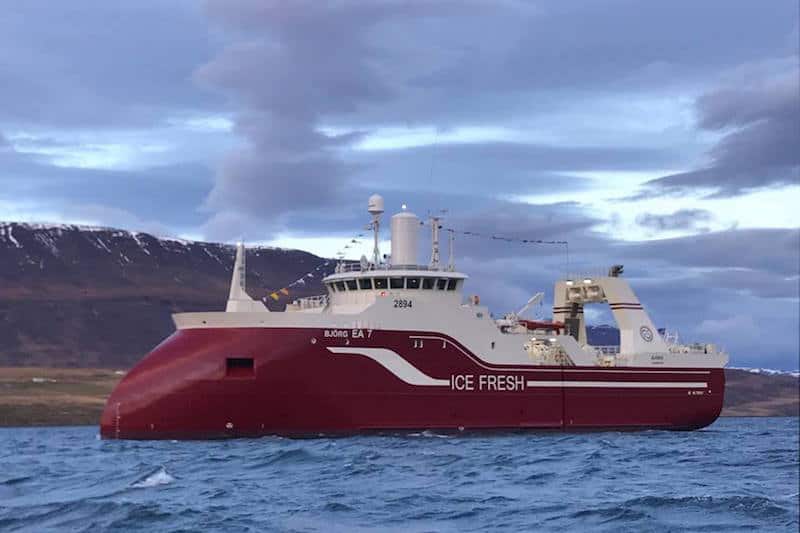 The third of the trawlers built for Samherji and the fourth in the series of Skipatækni-designed fresher trawlers built at the Cemre yard in Turkey has been delivered.

Björg EA-7 was steamed home from the yard in Turkey, following earlier deliveries Kaldbakur and Björgúlfur for Samherji and Drangey for FISK Seafood, all built to the same 62.49 metre LAO by 13.54 metre breadth design.

The series of four trawlers is designed by Bárður Hafsteinsson of Reykjavík naval architect Skipatækni, with input from Samherji’s technical staff.

Each of the trawlers has been delivered from Turkey with an empty catch handling deck. Drangey is being fitted out with a Skaginn 3X catch handling system, while the three Samherji trawlers are fitted out by local contractors in Akureyri to install the equipment for sorting, gutting and handling catches.

The catch handling deck is designed for ergonomic working, with streamed flows of fish through the deck and tubs filled at deck level to be taken to the fishroom in an elevator, where a forklift on overhead runners stacks the tubs.

The trawlers are equipped with Seaonics electric winch systems, with two 35 tonne main trawl winches, two pairs of four tonne sweepline winches at the head of the full-length trawl deck, and a 25 tonne pull net drum mounted over the deck. Additional winches are also from Seaonics and include 20 tonne gilsons, 16 tonne codend winches and other smaller winches.

Each trawler has a Yanmar 6EY26W main engine developing 1620kW at 750rpm to drive a 3800mm Cat Propulsion propeller inside a nozzle via a Reintjes reduction gear. The emphasis has been placed on efficiency, and the trawlers are designed to recirculate excess energy to heat the accommodation areas. There are shore connections for both electricity and a geothermal hot water supply.

Björg was steamed home from Turkey by skipper Guðmundur Freyr Guðmundsson with chief mate Árni R. Jóhannesson and chief engineer Kjartan Vilbergsson. Björg is now in the process of being fitted out and is expected to be ready to start fishing in the new year.