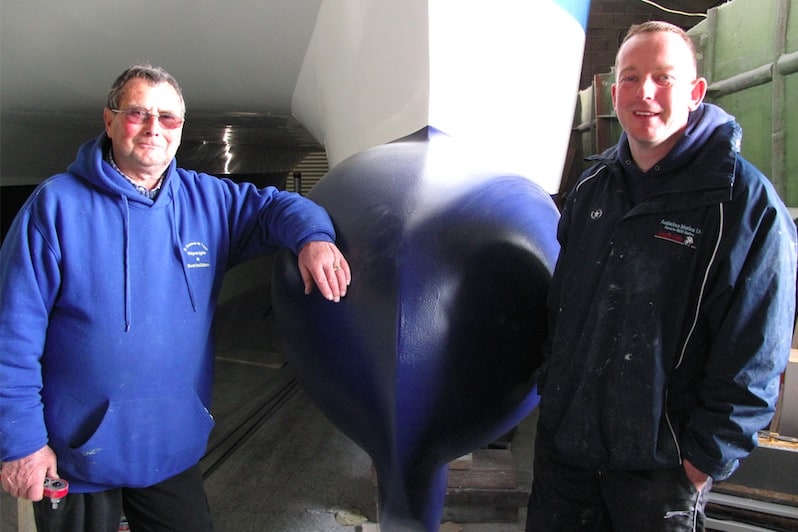 Audacious Marine in Ramsgate has had a busy year, with an even busier one to come. Paul Cannon who runs the company said that the yard’s orderbook is a healthy one, and all of the work they have lined up is for fishing vessels.

The yard is a young one, established a few years ago when Paul Cannon bought DP Marine’s moulds for the 8m and 10m Cougar catamarans. He later added 6m and 7m versions designed to operate with outboards.

He said that the change from fisherman to boatbuilder was an unexpected one, but he was no stranger to this kind of work, having a long background in the family business.

‘My father, Ron Cannon, is a shipwright and I spent the best part of twenty years working in the family business. That was mainly basic fibreglass work and refit work, so the background was there. But what we’re doing here now is on a different scale.”

With the Cougar catamarans selling steadily, then came the opportunity to buy the Sutton Workboats moulds for its 8m and 10m cats, which are now built at the Ramsgate yard and sold as Cougar Displacement catamarans.

‘Dave Sutton has been fantastic, phenomenally helpful and we wouldn’t have got through the first couple of boats without him helping us out,’ Paul Cannon said.

The list of newbuilds includes a new 10m Cougar Displacement cat for Essex fishermen James Craig only a few weeks ago, to be followed by a similar boat for Robert Mole which is being fitted out with a pair of JCB 80hp engines.

Like James Craig’s boat, Robert Mole’s new Debra Marie will be fishing from West Mersea and is being fitted out for netting and oystering, with a slightly larger stern gear and propeller than usual for towing. The stern section and deck are also strengthened to provide protection from the oyster dredges as they are hauled and emptied.

Two more 10m catamarans are under construction for customers in Ireland, one of which is also being built with a P5 passenger licence that means an additional layer of regulation has to be complied with, including fitting toilet facilites, a full shelterdeck and seating for passengers.