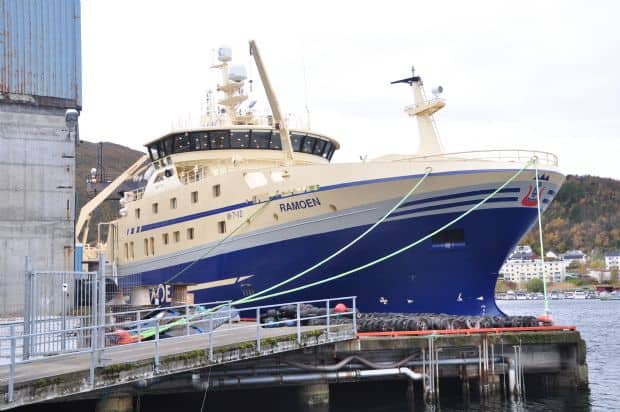 The latest factory vessel to join the Norwegian fleet, the Rolls-Royce-designed Ramoen built at Armon in Spain, is ready for sea.

The trawler is built for efficiency and economic running, making it a highly green fishing vessel, according to project manager and co-owner Atle Vartdal as Ramoen was being prepared for a short sea trial to test the factory.

Ramoen has the first Valka fillet cutting machine to be installed on a fishing vessel. The Valka machines have proved themselves in shore-based applications, using X-ray technology to identify bones in fillets and waterjet cutting systems.

‘We are a little anxious about how it works when there is some weather to cope with, but we are optimistic and think it will go well,’ said Per Magne Eggesbø, CEO of Fosnavåg company Eros, which has a 65% stake in Ramoen while the brothers Knut and Atle Vartdal own the remaining 35%.

He commented that quality is the prime consideration and it takes less than six hours between fish being emptied out of the codend and stacked in the fishroom as deep-frozen fillets.

‘The quality of the products can hardly be improved. We also see that these products, Fresh Frozen at Sea, are something customers are increasingly asking for,’ Per Magne Eggesbø said, adding that the UK’s fish and chip sector has been one of the company’s key routes to market, but the consumer side is growing.

‘In Norway, we are working with Leroy and Norway Group, and we see that there is increasing interest in retail-packed fillets,’ he said.

As well as its sophisticated fish processing capacity, Ramoen is also fitted out for shrimp as an alternative target species. The ship has also bene designed with research work in mind, with a drop keel for instruments and conference facilities on board.