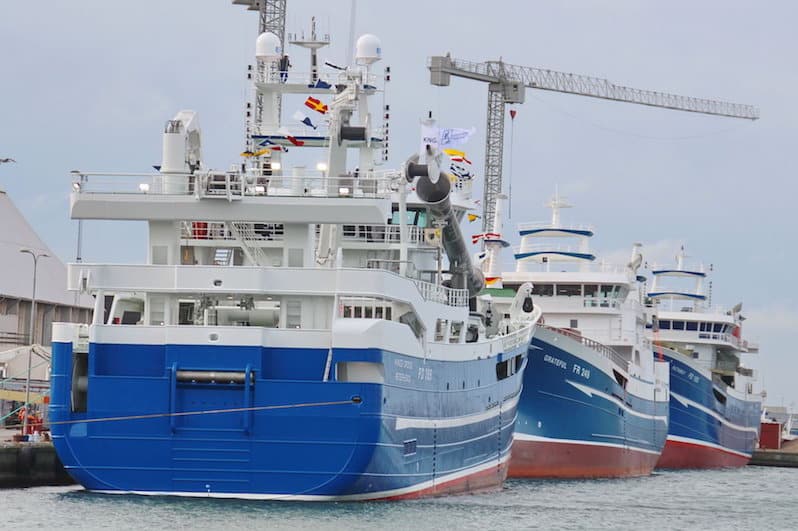 The latest pelagic vessel to join the Scottish fleet is the Kings Cross, built for the Buchan and Wiseman families by Karstensens in Skagen, and a string of newbuilds is set to follow it.

The eleven vessels on order at Karstensens include the 70 metre Grateful for Eschol Fishing and the new Pathway, which is a sister vessel to the 78.65m by 15.50m beam Kings Cross, reports Hook and Net.

Lunar Fishing has operated three pelagic vessels, of which two are replaced by the new Kings Cross, plus its whitefish vessels.

According to the yard, Karstensens has a long relationship with the Buchan family that goes back twenty-five years. Karstensens built the whitefish pair team Ocean Harvest and Harvester for Lunar Fishing.

Kings Cross has a Wärtsilä propulsion package, with a 5220kW 9L32E2 main engine driving a 4200mm diameter propeller to give a speed of around 16 knots. The propeller design is optimised for the ship’s service profile to run between 90 and 124rpm, providing optimum bollard pull for trawling while maintaining good free sailing characteristics.

In addition, it has a pair of 500kWe auxiliaries, a single 1200kWe auxiliary engine and a 150kWe harbour set, plus a 2500kW shaft generator. There are 950Kw bow thrusters and 900kW stern thrusters.

Kings Cross has its own charging room for the full set of sensors, including seven SS4 Super Catch Sensors, two Trawl Eye sensors (one for headline and one for tunnel), two SS4 combined depth and height sensors for purse seining, a set of SS4 Door Sensors and the new Scanbas second generation system.

Alex and Adam Wiseman and William Buchan decided on a 1280 mackerel trawl from Swan Net Gundry made with Helix self-spreading ropes, reported to give height and spread comparable to a conventional 1434 trawl. This large forward meshes are colour coded and linked with DynIce locks, and the trawl has an eight-panel back end.

Accommodation is for a crew of up to 16