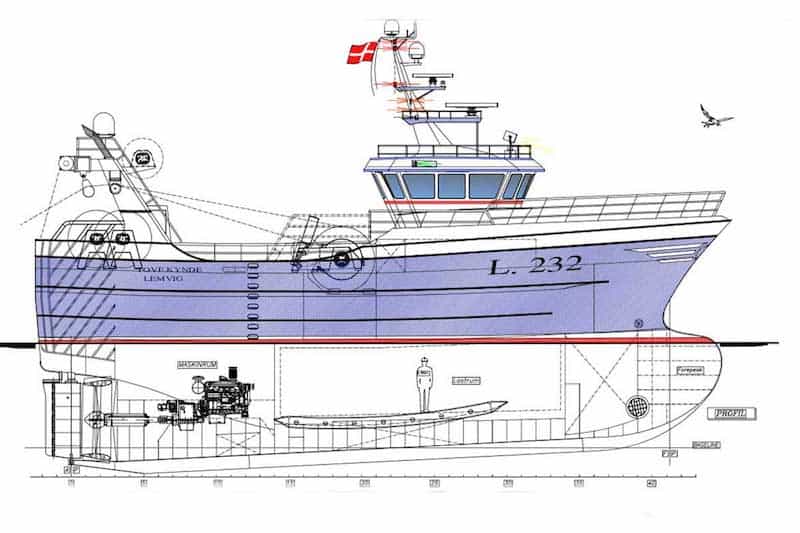 Thyborøn fisherman Martin Kynde is taking a step into the future, replacing an elderly wooden fishing vessel dating back to 1973 with a new trawler/fly-shooter expected to be delivered in the summer of 2020.

Martin Kynde has a reputation as an innovative and enterprising fisherman, and a recipient in 2015 of a Thyborøn Port Award as a young fisherman partnered with an established fisherman, in this case Tamme Bolt, to invest in bringing a new generation into the industry.

The present Tove Kynde, built at the Lemvig Shipyard in 1973, has served well, but the time has come for it to be replaced and the choice has gone to a new 23.95 metre overall, 7.40 metre breadth to be built by Vestværft. The new vessel with have a carrying capacity of around 900 boxes, a significant improvement on the present boat’s 300 box fishroom, which Martin Kynde said provides a significantly greater flexibility in operation, as well as having better workflows, safety and comfort on board.

He commented that the more streamlined workflow into an unbroken process means that quality is improved – which should translate into better prices. The crew’s quarters will also be very different, with more personal space and better galley and mess facilities, which is as well as the new Tove Kynde will be able to work further afield than the present boat.

Martin Kynde plans to work with four on board plus an apprentice, with a couple of additional hands so that the crew can rotate to give everyone trips off.

He intends to concentrate on fly-shooting, while having the option of trawling at certain times of the year as well as having the possibility of working in the Baltic.