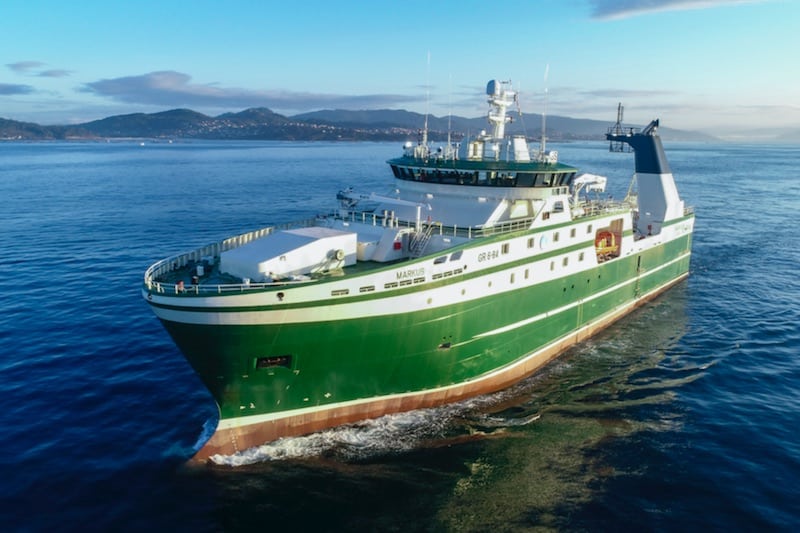 The naming ceremony for the Greenlandic factory trawler Markus took place at the CNP Freire shipyard as the Vigo yard delivered this modern Rolls-Royce-designed stern trawler to its owners Qajaq Trawl A/S and Polar Seafood A/S.

The 80.80 metre LOA, 17 metre breadth NVC 375 factory trawler is the first of two identical trawlers for fishing shrimps in Arctic waters for owners in Greenland, and the ceremony took place in Vigo as Markus’s godmother Rhea Helimann gave the new ship its name – making it the latest in a series to sail under the Markus name.

Markus breaks new ground in being one of the most technologically sophisticated fishing vessels of its kind, with high levels of automation in its production deck, deck equipment and in terms of fuel consumption.

Designed by Rolls-Royce, Markus also has a host of Rolls-Royce equipment on board, including the 5400kW Bergen B33/45L9P main engine, 3300kW PTI/PTO shaft generator, and a pair of 1843kW RRM C25:33L6A2 auxiliary engines. Additional auxiliaries are a 910kW Mitsubishi S12R-MPTAW and a 250kW Volvo Penta D13MG emergency set.

Markus has a Promas propulsion system, integrating the propeller, a hubcap, rudder bulb and the rudder itself into a single hydrodynamically efficient unit. The Hybrid Shaft Generator (HSG) system enables a highly flexible use of engine and propeller speed variations to maximise both propeller and engine efficiencies, which contributes to reducing exhaust CO2 and NOx emissions.

The processing deck is laid out with four IQF belt freezers capable of handling 100 tonnes of shrimps per 24 hours and the two automatic horizontal plate freezers have a 25 tonne per 24 hours throughput capacity.

Markus has an all-Faroese fishing gear package with doors from Rock Trawl Doors, and trawls and other equipment supplied by Vónin.

Vónin also delivered the ship’s rigging, gilsons and other deck equipment and an extensive inventory of spare parts.

The doors are from Rock, and Markus has been supplied with two pairs of 14.50 square metre Sea Hunter trawl doors and two 9200kg rolling weights.