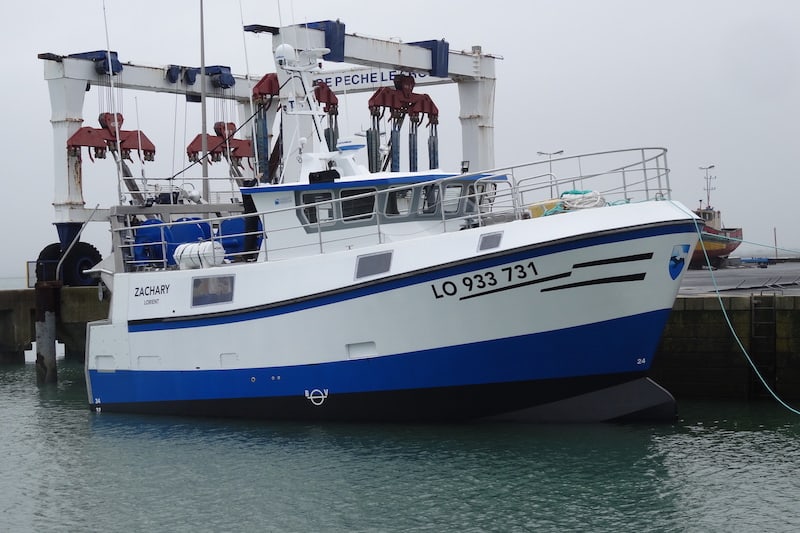 A new GRP-hulled trawler for owners in Lorient in western France has been built by the Chantier Naval Croisicais yard and was launched yesterday.

The Coprexma-designed Le Zachary has been built for Frédéric Lucas, a member of Groupement Artisans Lorientais, who also owns the 13.10 metre Alice Paul II, which was built in 2002. Le Zachary measures 13.80 metres with a beam of 5.80 metres and has a 280kW main engine. The deck is laid out with two trawl winches and three net drums built into the stern gantry.

The choice was made to go for GRP construction for ease of maintenance.

Designed to focus on langoustine and groundfish, Le Zachary has a 15 cubic metre fishroom and two tanks for keeping catches alive.

‘We are pleased to contribute, once again, to the much-needed renewal of the French fishing fleet. We do everything we can to meet the expectations of shipowners and shipyards and to help them meet the economic and environmental challenges facing the fishing industry,’ said Jean-François Ansquer who heads Coprexma, which also designed Le Breizh, delivered recently by Socarenam to owners in Lorient, and Scapêche’s 2015-built Jean-Pierre Le Roch.

The company is also designing another 12 metre trawler to be built by Chantier Naval Croisicais in La Turballe. Coprexma and Chantier Naval Croisicais have a long shared history of designing and building fishing vessels, including a series of longliners for New Caledonia that were delivered some years ago, and between them the two companies have delivered dozens of fishing vessels.

Seiner to fish in Angola