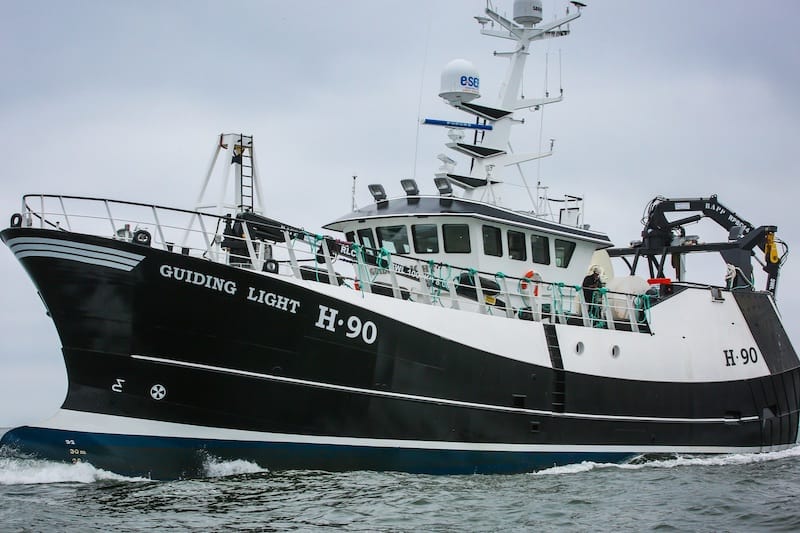 Guiding Light became the latest symbol of marine industry optimism, as the new trawler departed from the Parkol Marine Engineering shipyard in Whitby. One of the key features to its operation is a commitment to new, greener fishing methods.

The pair trawler, ordered by Guiding Light Limited and parent company, Hull-based Andrew Marr International Limited, is heading for Peterhead, where it will fish for whitefish alongside sister ship Guiding Star, which was also built by Parkol in 2014.

Skipper Gavin Thain explained that Guiding Light is a product both of a burgeoning fishing industry, and of the innovative approach his company is taking to sustainable fishing practices, and greater environmental friendliness in general.

‘The industry has been quite buoyant for four or five years now and looks set to remain that way,’ he said.

‘A lot of this is down to the effort fishermen like ourselves have put into technical measures such as more selective fishing gear that protects juvenile stocks, to ensure greater sustainability. We have been working closely with the Marine Management Organisation (MMO) to get that right and adhere to their fishery landing obligations. For example, we have CCTV cameras installed to record what we are catching and exactly how we are doing it, reducing waste and, as a result, bringing back better catches.’

And Marr are leading the way in environmentally friendly practices.

‘We retain all our waste onboard, such as plastic, and don’t discard anything into the sea other than biodegradable items. While this isn’t a legal requirement yet, we see it as a moral one, and through our ‘garbage plan’ we are aiming to lead industry practices,’ Gavin Thain added.

Parkol Marine pride themselves on building bespoke boats to owners’ specific requirements and Gavin has worked closely with them to play a strong role in the build process. With 20 years’ experience of both vessel construction and as skipper, he knows what he wants the ship to achieve.

‘She is very similar to her sister vessel, with some tweaks to things like her fish handling equipment, and more ice-making equipment for better catch storage. She’s also fitted with an echo sounder which helps us to avoid discard by showing us the size of the fish before we trawl for it,’ commented Gavn Thain, who was involved closely from the outset with the design of the boat, which was developed with the objectives of reducing discards, being green and achieving better catches.

‘I’ve been visiting Parkol every couple of weeks since the ship’s keel was laid and spent the past few weeks on site, working alongside the team to get everything spot on. They’ve been fantastic and have really grasped everything I wanted, respected my fishing experience and really gone the extra mile to make it a reality,’ he said.

Gavin is also a key link in the chain for Guiding Light Ltd and Marr International, as an experienced skipper playing his part in passing on vital skills to the next generation.

‘It’s all about investing in the industry and the young fishermen coming through, to ensure strong succession. So I’ll be heading up a crew of younger fishermen and aiming to train them to keep important skills alive. Having the opportunity to contribute to the plans for this boat and pass on my years of experience to others coming through, really is the fulfilment of a dream for me and I’m very much looking forward to fishing with Guiding Light in the next few weeks.’

Guiding Light was lifted into the water at the Parkol yard at the end of April, and the weeks since have been spent making finishing touches to the vessel ready for her to set sail today.

As a result of the optimistic approach of trawler owners like Guiding Light Ltd  and Andrew Marr International, Parkol is experiencing one of its busiest times ever, with demand for its boats doubling in the past 12 months – so much so that they opened a second yard in Middlesbrough last year.

‘The confidence in the fishing industry and the number of new vessels on order in the UK is unprecedented,’ said Parkol’s Sally Atkinson.

‘This is creating an equally positive period of growth for us at Parkol, coupled with the new opportunities to diversify presented by the offshore wind developments springing up off the east coast of the UK in particular. Although we have specialised in trawlers, we also have the ability to build any other type of aluminium or steel hulled vessel – including workboats, wind farm supply vessels, small cargo vessels and tugs – either in Whitby or our new fabrication hall at Middlesbrough. We are receiving enquiries from further afield, including into Europe, for new vessel commissions.’

Parkol has been repeatedly recognised in the industry – winning the Fishing Vessel of the Year award in the annual Fishing News awards in 2015 and 2016, and the company had three vessels nominated in this year’s awards.

Hybrid longliner on the drawing board