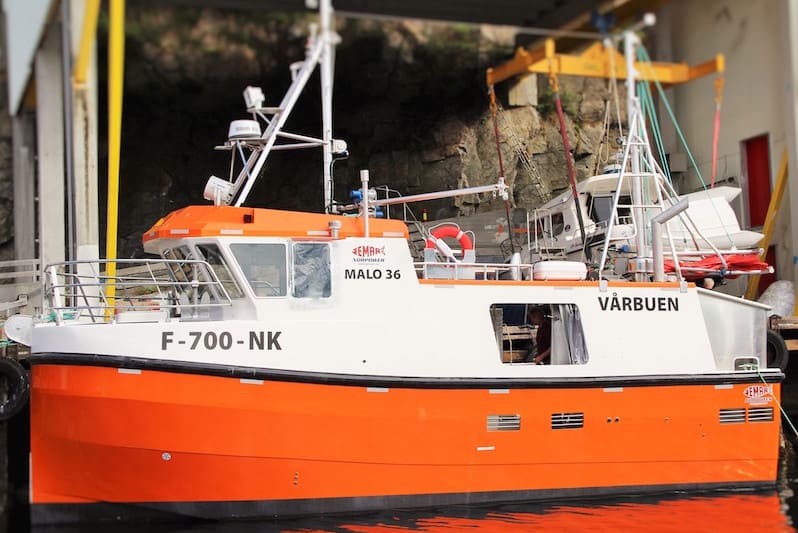 A Malo is a family affair

He is the third generation of his family to be a fisherman, following in the footsteps of his father and grandfather, and this is also his eleventh boat which brings the family’s fleet up to five boats, all fishing around Kamøyfjord and Kamøyvær, all of them fishing with nets for cod, saithe and some crab.

‘This is not the first time Harry has been to our production yard at Sørholmen in Kristiansund,’ said Nina Ersnes at Jemar Norwower.

‘In 1974, when Harry Severinsen was only 12 years, he spent his six-week summer holiday here with his father. His father had bought a Malo fishing vessel and they spent summer here while the boat was being built and trialled.’

‘We’re always pleased to see Harry Severinson and our other customers coming back to us. Being a Malo owner is a something that runs through the generations,’ she said.

Harry Severinson’s new 36ft Malo Sjark, Vårbuen, measures 10.99 metres with a beam of 4.45 metres, providing plenty of deck space and an 18 cubic metre fishroom. The boat also has comfortable accommodation, with a mess and galley area in the wheelhouse, which has an all-round view. There are two cabins below, along with a shower and WC.

The main engine is a Cummins QSL8.9 driving a Nogva HC258 reduction gear with a 43.95:1 ratio, turning a four-bladed N4-260/85 propeller and powering two PTOs. Vårbuen also has a Sleipner hydraulic SH550 386TC side thruster.

Vårbuen is fitted out for netting, with a Lorentzen Hydraulikk LHG1200 net hauler, as well as winches for the 500kg landing boom.

Deck lights are from OA Solhaug, navigation lights are from Hukkelberg and interior lights were supplied by Hella Nor Marine, while Vårbuen’s wheelhouse electronics are from ProNav and Furuno.