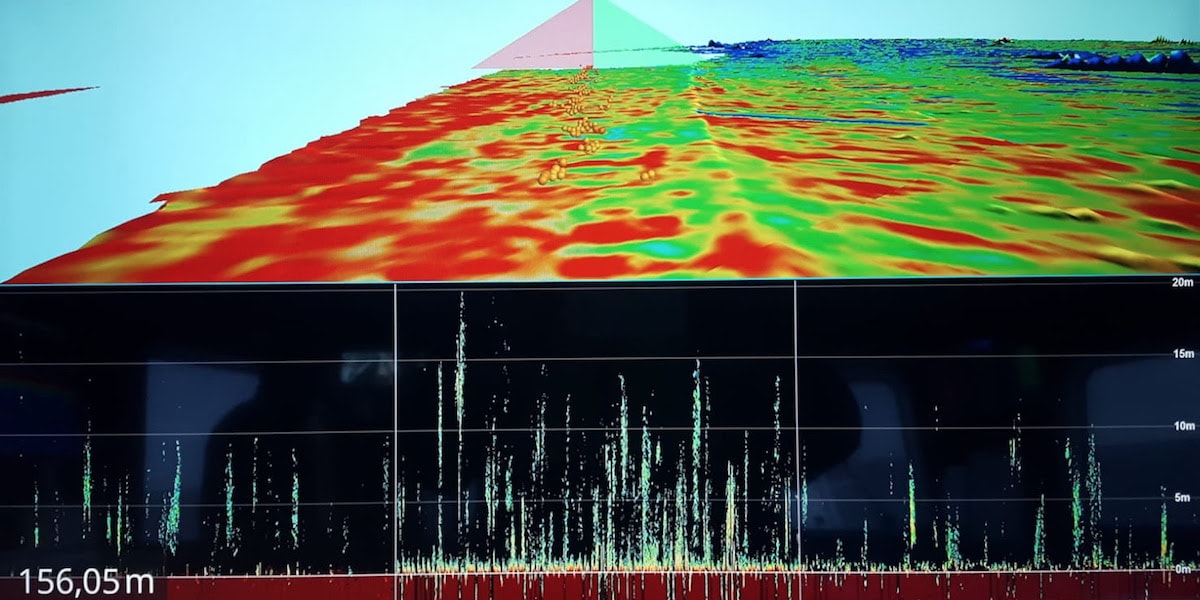 The WASSP F3X screen with backscatter with squid showing in the sounder and as water column targets. Image: WASSP

One of the Vigo-based trawlers fishing for squid in Falkland Islands waters is seeing the benefits of having a WASSP F3X multibeam sonar on board.

The 83 metre trawler went through a recent refit, during which the system was installed by WASSP’s Spanish dealer, before Igueldo sailed south for the squid season.
According to skipper Miguel Pouseu, it was immediately clear that even small amounts of squid were showing up clearly on the sounder and stored in the 3D Bathymetric map.
‘Squid detection is just perfect, equally as good if not better than any other echo sounder. Also, the 3D vision and the hardness of the sea bed are very good, although this needs some fine-tuning during the next call in Vigo,’ he said.

WASSP technical engineers will work with Igueldo’s skipper Miguel Pouseu to fine-tune the system to suit his specific needs.
‘In my personal opinion the F3X represents a real leap forward in WASSP technology. The WASSP team should be very happy,’ he added.
The latest model in the F3 range, designed specifically for the commercial fishing industry, incorporates a number of significant improvements by WASSP’s design engineers.
It offers significantly more power – over 12 times more than previous F3 models – along with a long pulse time that equates to more energy in the water. In addition to more clarity in shallow and medium depths, the F3X with its 80kHz transducer can map the sea floor at depths of 1000 metres and clearly records and water column targets at 850 metres.
The F3X also comes with the patent-pending WASSP Interference Management System (IMS) including Advanced Key Pulse (AKP) installed, helping to cut down the interference generated when a number of different sounders and sonar systems are being used.

ProNav to expand across UK, Ireland and Nordic region under JRC ownership